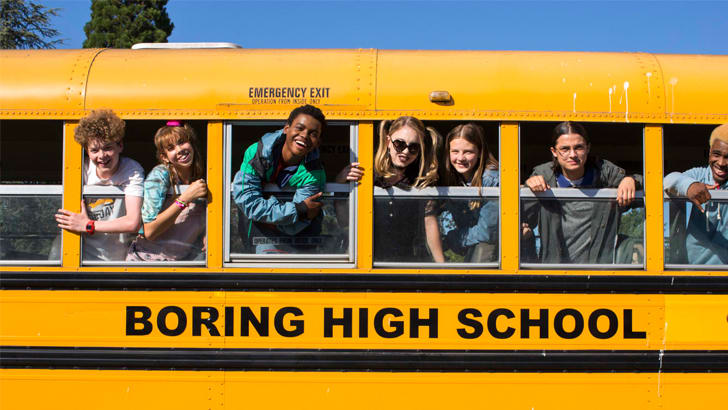 Season 1 was aired February 16, 2018 on Netflix, this season is compose of 10 episodes that explains mostly the main characters life and how is their present. This season it is mostly about two groups of students at Boring High School in Oregon in 1996. Luke O'Neil is a freshman at Boring with his friends McQuaid and Tyler are socially marginalized. On the first day of high school, they join the Audiovisual Club, where Luke falls in love with Kate Messner, the administrator’s daughter and a second-year student at Boring high. Kate, however, begins to question her sexuality, and the theater student Emaline Addario catches her attention after a performance in the cafeteria announcing the work of the school. However, Kate starts dating Luke after the rumors that she is homosexual spread throughout the school. When an accidental destruction of the sets causes the cancellation of the work, Luke and his friends suggest that the Audiovisual Club and the Drama Club make a film together, which will then be screened throughout the school. Meanwhile, Luke tries to discover the VHS tapes his father made before leaving him and his mother. Luke's mother, Sherry, begins to approach Ken (Kate's father and Boring high School Administrator) after a meeting about Luke in his office.

"Sometimes I Hear My Voice" - Episode 6

"Cheesecake to a Fat Man" - Episode 7

"I Just Wanna Be Anybody" - Episode 8

"My Friends Have Been Eaten by Spiders" - Episode 9

"We Were Merely Freshmen" - Episode 10

Community content is available under CC-BY-SA unless otherwise noted.
Advertisement